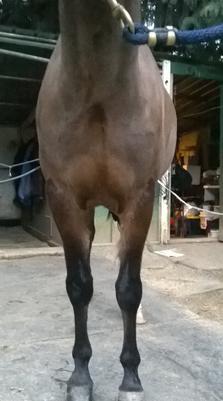 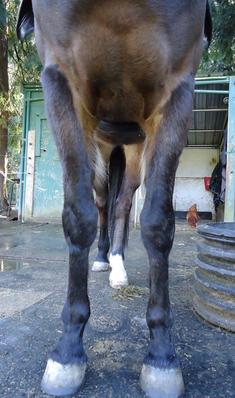 Elijaha Before with a 'Rolled Barrel".  Click here for Does my horse need work

"Daniel Stridewright is a wizard."

"So nice that you could share this. Hadley is amazing from all Daniel put right in his big body!" 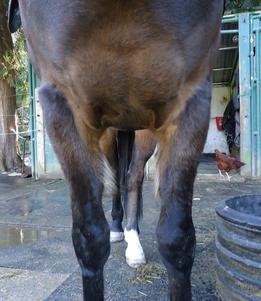 March 25 at 11:57
"First photo show Elijaha's chest prior to Daniel Stridewright 's Structural Integration treatment... his breastbone was off center and the tissue is dropped towards his left front leg... Second 2 photos were taken a week after his treatment."

"I would recommend that everyone have their horse checked over... Elijah had a very bad upside down fall last year, but his chest problem had been there prior to that... I just thought it was from being more weighted on his left front as he has a high heel/club on his right front... almost gone now though since switching from steel to barefoot,stretching and balanced mineral/hay diet.. the chest did not change tough until after Daniel did a manual "adjustment" on the ribs/barrel/breastbone."

"I saw the look of amazement on a young owners face today: She was walking the horse after his first treatment and when he halted, he was absolutely square... something that she had never seen for the years she has owned him... wish I had recorded her squeal of delight! She called Daniel due to a hoppy canter that was getting worse... no wonder, his hips were way uneven and his hind leg ligaments were "stuck"... the difference in his walk was astounding after the treatment. I look forward to see him in the arena tomorrow."